The Marmolada cableway runs up from Malga Ciapela to the top of the Queen of the Dolomites, at 3265 m, giving the opportunity to skiers of entering the highest ski resort of the Dolomiti Superski and of skiing on the longest ski slope in the Dolomites, called La Bellunese, which descends towards Malga Ciapela for 12 km across magnificent and fascinating landscapes.

From the ski area Marmolada you can reach Arabba slopes and the Sellaronda Ski Tour, a spectacular ski tour around the Sella massif, to which the Marmolada is one of the main access doors. The overall distance is about 40 km, 26 of which are ski slopes that can be comfortably faced even by not so skilled skiers. This is the ideal itinerary if you want to spend a day skiing and having fun.

However, Marmolada has a lot to offer also to non-skiers. Using the cableway, people can go up to the panorama terrace of Punta Rocca and to the cave-chapel, symbol of peace, which hosts the statue of the Holy Mary, donated and consecrated by John Paul II. Visitors can then descend to Serauta station, and visit the highest museum in Europe, Marmolada Grande Guerra 3000 m. The museum focuses on the most important events and battles happened on the Marmolada during the Great War, using as a leitmotiv, through the whole exhibition, the tales, the fears, and the lives of the men-soldiers, without any distinction of nationality or flag. Visitors will have even the possibility to have lunch on the Marmolada, in Serauta’s restaurant, while in Malga Ciapela there is a bar, which is a perfect solution for a quick snack.

If you need an alternative idea, to breath clean mountain air and to relax into a snow muffled environment, you can have a nice walk through Malga Ciapela’s woods, or in the old and picturesque village of Sottoguda, which has just been added to the list of the “Most beautiful villages in Italy”. Here, the time seems to have stopped among the small cobbled streets, the wooden houses, and the handcraft shops. Life there flows as slow as the river Pettorina along the famous Gorge of the Serrai, which connects Sottoguda to Malga Ciapela. This is a natural canyon, 2,5 km long; a unique wonder in the Dolomites area, newly become a protected natural reserve. 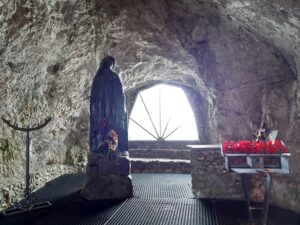 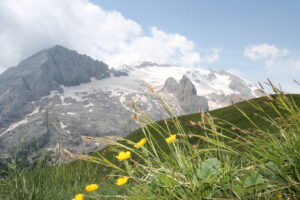