“We fought and we died up there, not with hatred, but with a deep pain in our hearts” (F. Bernard, Italian speaking, Austro-Hungarian soldier). They were men before being soldiers and this is one of the many important messages that the Museum of the Great War 3000 m in Serauta (Marmolada) wants to transmit to its visitors.

Its position, at the centre of the Sacred Area at 3000 m, on the Queen of the Dolomites, is already symbolic, however, this is not enough for deeply understanding what happened to the Austro-Hungarian and Italian soldiers during the war on the Marmolada. Emotions, fears, but above of all the ongoing war with nature: wind, cold, snow, ice; these were all distinctive elements of a territory that was unwelcoming because of its remarkable elevation: this is the leitmotiv, which guides the visitor along the itinerary of the visit to the exhibition that covers 300 m2 of the second floor of Serauta station, which can be easily and comfortably reached by cable car from Malga Ciapela, on the side of the Marmolada belonging to Belluno district.

To give the opportunity to everyone of deeply getting in touch with the life of soldiers during World War I, the museum has decided to extend the period of the free guided tours with until Sunday, 9th April 2017. The guide will take back in time the visitors thanks to her words, but also thanks to historical videos; pages of diaries; war artefacts, emerged from the glacier; reconstructions of huts and trenches; sections dedicated to excavation works, to the rescue of wounded soldiers, and to medical treatments. The guided tours are held on prior reservation by a skilled local guide, from Wednesday to Sunday, with the following timetable: from 10:00 to 11:00 and from 14:00 to 15:00. Concerning the costs, visitors have just to pay the ticket of the cableway: 24,00 € per person up to Serauta (where there is the museum) and 30,00 € per person up to the panorama terrace of Punta Rocca (3.265 m). After the visit, you will be offered a hot chocolate.

The large windows of the museum, in front of the Sella group, allow the visitors to see, thanks to the help of some telescopes, the main war positions of the Italian Fortalice on the rocky ridge of Punta Serauta, where there are many different cave-shelters, which hosted the Italian troops from April 1916 to the 4th November 1917. 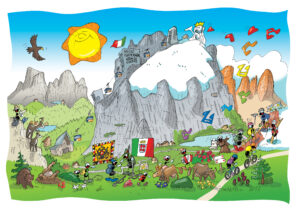 GUIDED TOURS TO THE MUSEUM 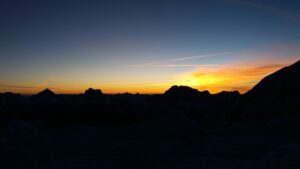 SUNRISE ON THE QUEEN